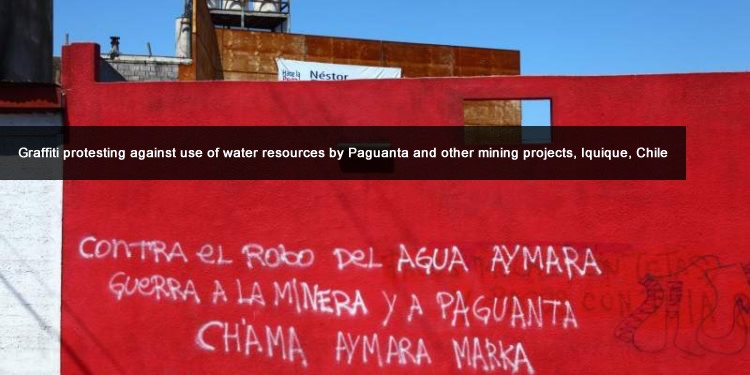 The collapse of metal prices in 2013 shifted the investment risk focus from national governments to local communities. With royalty incomes dented, national governments became stingy about sharing taxes with local communities, exacerbating an historic rift. Over the last five years, angry communities have learned to fight back, resorted to a series of opposition tactics, including local referenda, where residents vote on the fate of a mining project.

Armed with smartphones, local communities can broadcast their conflicts with mining sites and any heavy-handed policing by national police or the military. In a period where national governments across Latin America enjoy record low support, few leaders are willing risk political capital to quell a local protest that interrupts a mine. Today, a network of support for these local opposition efforts comes from NGOs who bring proven fighting tactics to local communities. This pattern has already had serious consequences for Guatemalan, Argentine, and Colombian mining interests. More recently, local referenda led large investors such as AngloGold Ashanti to close their La Colosa mine in Colombia, for example.

New mining investors often fail to research the history of the mine and the impact of misdeeds by former miners on community relations. For example, in Minas Gerais, Brazil, Anglo American’s poor community relations near its Minas-Rio property did not start with recent pipeline spills but were already plagued by corruption practices under previous owner Eike Baptista.

Eike Baptista’s corruption created unreasonable financial expectations among stakeholders that Anglo-American rightly refused. It took more than a year for Anglo American to move forward with environmental licensing as local power brokers regularly lobbied city and provincial governments with the hopes of a kickback. Extortion attempts were so frequent that Anglo American threatened to leave the state.

Competing economic activities near the mine can produce natural opponents to a mine’s development. Farmers who rely on ground water and fear contamination or tourism interests who worry a mine will spoil a region’s natural beauty are two examples. Large employers (manufacturing, farming, services) worry that a mine will compete for labor and drive up wages.

In Colombia, several mining companies have faced opposition from the rice and flower industries worried about water rights. In some of these cases, these politically weak industries whose complaints were ignored by government, turned to local criminal groups and corruption to gain local political support for their opposition to the mine.

Guyana Goldfields and their comprehensive agreements with overlapping economic actors is an interesting case of a good practice. The mining company signed a local infrastructure sharing agreement with neighboring logging companies and built a road together that serves both interests.

It is essential for a mining company to engage early with local economic actors to understand their concerns and political influence. Understanding their needs and fears is essential to constructively engage with them and find a viable solution. A precautionary approach is always less expensive than mending future broken bridges.

A powerful tool for winning local support is through a strong commitment to procuring from local vendors. The trickle-down effect of the mine’s goodwill is impressive. Local vendors to the mine, along with employees, become credible advocates of the mine and help defend the mine’s interests in the local community.

In Ecuador, Lundin Gold developed an award winning local procurement strategy by establishing a database of local partners and subcontractors. This encouraged the local population in the Zamora Chinchipe province to formalize their small business activity while simultaneously providing essential data and intelligence to the mining company. Lundin went on to develop an innovative catering policy that sources from local agriculture and service companies.

Regular struggles with informal miners can plague local community relations. Turning a blind eye to informal mining operations can expose miners to reputational risks if, for example, mercury leaks into a river. This strategy also creates a space for other small-scale miners to trespass their property. Conversely, confronting informal miners head on and adopting a zero-tolerance policy will likely antagonize local communities since some have informally mined for decades, sustaining the community with their small production.

To prevent illegal miners trespassing onto its property, Gran Colombia Gold helped authorities break up an arms trafficking ring in their Segovia mine. Illegal miners retaliated with the help of criminal groups by blocking the mine and locking down two mining towns. The conflict gained national and international press coverage, damaging the miner’s reputation.

After 42 days of lost production, a compromise was eventually reached with Gran Colombia, incorporating small mining collectives into its operation. Local small-scale miners signed individual contracts which allowed them to operate within the mining site in accordance with the government’s health, safety and environmental requirements. In return, the company retained between 10% and 60% of the gold’s per-ounce spot price.

Engaging with and including informal miners in a revenue sharing agreement can prove very effective, not only to improve community relations but to also gain political allies. Companies who adopt this constructive strategy benefit from the support of informal miners when standing up to criminally financed illegal mining.

The key to success in managing community opposition to environmental concerns and indigenous claims is to ask, not assume, the priorities and fears of project opponents. Based upon historic abuses and water contamination by former (often government owned) mining operations, local communities are acutely sensitive to environmental issues. As a result, ensuring steady and honest communication is essential as well as regularly surveying public perception. By polling local communities and communicating directly with the community, miners can help evade efforts by corrupt local politicians to extort monies in return for peaceful community relations.

Similarly, when engaging indigenous communities, an understanding of their unique demands and concerns is crucial. In several cases miners have wasted CSR budgets building infrastructure or socialization initiatives that were not deemed a priority by the indigenous. The demands of the indigenous are as varied as any local stakeholder and no miner should assume without asking what solution might work.

When to Monitor Community Risk

When a mine is being developed, miners are wise to adopt a regular dialogue with the local community, as Lundin did with Fruta del Norte in Ecuador where they set up committees dealing with different issues and invited local leaders to sit on said communities which met each month. At the same time, it is important to develop a 3rd party listening post nearby, run by a firm like Americas Market Intelligence (AMI), to understand all the local and national players influencing the community and what impact that influence might have.

In short, miners must pay as much attention to local communities and building bridges there as they have historically done with national governments.

Contact us to learn more about we help mining companies and investors managing community risk—as well as other types of risk—in Latin America, based on 10 years of conducting 200+ studies for miners operating in LatAm.